This week’s focus is on kicking one-steps (1-10) while not neglecting our basics. White and Orange belts need to be practicing all your forms through Pyung Ahn Cho Dan. Green Belts and up begin learning Pyung Ahn E Dan and Pyung Ahn Sam Dan. I plan to cover these in class along with our Ho Sin Sul. 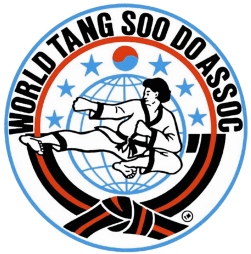 –  Six Stars: Represents the six inhabited continents and shows that Tang Soo Do is now worldwide.
–  Um, Yang: Red and Blue alf circle symbol represents universal concept of opposing but complementary forces. It is also the central symbol of the Korean flag where Tang Soo Do originated.
–  Flying Side Kick: Represents the special and unique character of Tang Soo Do and the whole person concept.
–  Red Circle: unity and Brotherhood.
–  Globe: Means our organization covers the world.
–  Bottom Belt: Masters’ Belt – Represents the ultimate goal of all Tang Soo Do students.
–  Practitioner: Mastering the Art of Tang Soo Do
–  Color Combination: Red, Blue and Black

Meaning of Tang Soo Do:

Literally translated, the word “Tang” refers to T’ang Dynasty of China, which reflects the shared cultural background between China and Korea (AD 617-907) .
“Soo” means Hand , but it implies fist , punch , strike , or defense .
“Do” means the way of life or art.

1. Purpose of training should be the enhancement of mental and physical betterment.
2. Serious Approach.

Meditation for the Week

In fighting choose with sense and honor – Remember last week’s meditation? I talked about battle. What is the difference between “battle” and “fighting”? A Battle is a confrontation you did not agree to; it’s non-consensual, or something you would prefer not to engage. A “fight” is a consensual conflict like sparring or debate. The challenge is to maintain your self-control, humility, and respect during the “fight” – that’s fighting with sense and honor. As Paul instructed Timothy, “Fight the good fight of the faith. Take hold of the eternal life to which you were called and about which you made the good confession in the presence of many witnesses” (1 Timothy 6:12). You should be proud of your actions and reactions after the fact. Paul continued his exhortation to Timothy by saying, “I have fought the good fight, I have finished the race, I have kept the faith” (2 Timothy 4:7). Paul was content with the manner in which he lived, and at those points he was not, Paul rested in the Grace of Christ. There is a large bit of overlap between our fourth and fifth codes of Tang Soo Do, still I want you to understand the differences. Each of you will be forced into a variety of conflicts, either battles or fights, therefore you must decide now and practice how you will respond and engage. You will do without think that which you practice.